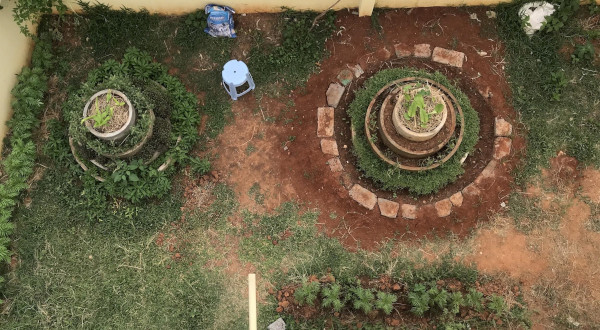 Just a few months ago, the public meeting area in V Kallahalli, a village just a few minutes from the tech glaze of Sarjapura, lay unkempt. The building’s compound was baked barren in the hot summer. Only an odd rock agama scampered on it’s walls.

But now, the building is transformed into a nursery of edible weeds. At the building’s gate, a clump of saplings, of weeds like honnagamme found on lake-beds, blanket the once withering ground. Towards the far end of the compound, a pair of cemented step fountains hold mixture of turmeric, ginger, Ivy gourd, Ceylon spinach, Nellabasle and Arve soppu. Along the walls, vegetables like brinjals and bottle gourds will be planted soon.

The compound, now, is a hub of activity as the villagers frequent it’s premises to harvest the weeds.

The initiative is the brainchild of Suresh Kumar G (also known as Samuha Suresh in the art circles of Bengaluru), a community arts practitioner and an enthusiastic gardener. In the past, the villagers used to harvest the weeds that grew amidst their fields and around the village. But in the past decade, as the village itself changed and farms turned into buildings and roads, these practices faded away. As Suresh’s terrace garden grew, he realised the vanishing traditional customs. “I want the wild weeds to make a comeback and for the people to grow them in their kitchen or home gardens,” says Suresh.

To make this happen, Suresh approached Janani Abhivriddhi Swasahaya Sangha, a self-help group active in V Kallahalli. To put across his idea of reviving a lost tradition, Suresh gave the group, comprising mostly of women, a presentation where he showed them photographs of the vegetables, herbs and weeds he grows on his terrace garden. Once the women realised that it is possible to grow vegetables in a small space, they bought the idea.

Many members of the village were interested in growing a kitchen garden but either didn’t find the time as they took up other professions or were negligent of such age old practices.

But the villagers of V Kallahalli are turning a new leaf.

“I now find time to work on the garden and I am happy doing so,” says Ashwathamma, the president of the group and a former teacher. “Many others of the community are interested too and the twenty-five members of our group meet once a week to exchange seeds and information.”

The bane of pesticides and prevalence of diseases has caught up with the villagers too. But they see health benefits in growing their own produce. “Since we don’t spray any pesticides on our kitchen garden crops, they are healthy and nutritious too,” adds Ashwathamma.

Sometime in May this year the seeds of change were sown when Suresh conducted a seed exchange programme where he distributed seeds of the weeds that he’d grown, to the members of the self-help group and other villagers. The event was a roaring success with a massive turnout. The gathering also cooked many of the weeds that Suresh had brought along.

Suresh not only wants to bring back the weeds but also wants to revive the recipes and cooking techniques of the weeds. “Reviving recipes is the main project but for recipes you also need to grow the ingredients,” says Suresh who originally is a native of the V Kallahalli but lives in Bengaluru. His interest lies in documenting the knowledge of the villagers’ practice from the past where they mixed 7 – 8 types of greens into one curry. Unlike most other Indian regions, they also made these curries in minimal of spices, substituting them with herbs instead, giving the curries their fragrant flavour.

The weeds have always been around but they were never propagated or sold in the markets. Some grow on the beds of lakes in the village, others around the village. The villagers went foraging for them in the past. “They were never grown as crops but were widely available,” according to Suresh.

“Weeds is a misnomer as they are also edible.”

Suresh hopes the weeds continue to make a comeback as they wouldn’t not only be nutritious addition but also help villagers reduce their dependence on the market.

Editor’s Note: Sarjapur Curries is a grantee of the Bengaluru Sustainable Forum from the Urban Biodiversity Retreat. To keep tabs on the progress of Sarjapur Curries, please refer to the Projects page