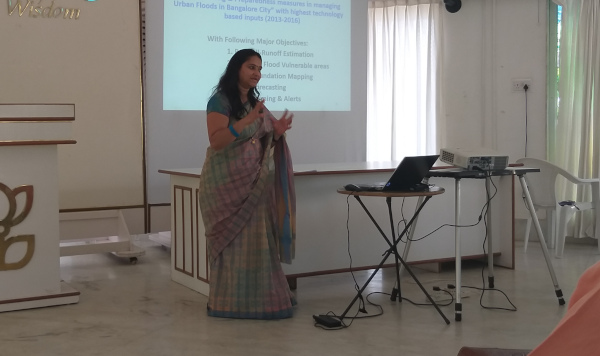 “It was my childhood dream to work on water,” says Avinash. ” Water is my religion.”

In conversation with hydrologist Shubha Avinash.

Dr. Shubha Avinash is a Scientific Officer, heading the hydrology department at the Karnataka State Natural Disaster Monitoring Centre. The centre is first-of-its-kind in the country, established in 1988 to monitor droughts in Karnataka. But over time all natural disasters have come under its purview.

As the person in charge of the hydrology section, Dr. Avinash supervises all aspects of water – rainfall, river flows, flood management, conditions of the lakes, etc. Her mandate covers both – the state of Karnataka and the city of Bengaluru. Trained as a civil engineer, Dr. Avinash changed tracks to work on issues related to water. The subject is so close to Dr. Avinash’s heart that she considers ‘water to be her religion’.

In a free-flowing conversation with Bengaluru Sustainability Forum, Dr. Avinash shares insights about her work, her recent studies on urban floods, making Bengaluru sustainable, place of water in the 2031 Master Plan and what gets her excited.

Q. What does your work as the head of the hydrology entail?

Karnataka has two watershed basins – Krishna and Kaveri – we’ve thirteen major reservoirs in the state with four in Kaveri and the rest in Krishna basin. These reservoirs are managed by the water resources department and they gauge the inflow, outflow, capacity of the reservoirs, etc. Karnataka State Natural Disaster Monitoring Centre collects all such information from the department and maintain our database. Our data goes back almost 30 years and we use this data to predict the water flows for the day. We are able to analyse outcomes in terms of reservoir management. We also use data to manage water sharing between our neighbouring states. Apart from this, since 2013, the major project that we’ve taken up is forecasting urban flood management.

Q. Can you elaborate on your urban flood studies?

Urban flood studies, according to Natural Disaster Management Authority guidelines, should have ground measurements to manage the water resources. Before 2012, in Bengaluru, there were only two measurement gauges installed by the Indian Meteorological Department (IMD) – one at Hindustan Aeronautics Limited (HAL) and the other at Palace Grounds. But these covered only the city centre. The one at Palace Grounds was installed way back in 1901. Later in 1963, IMD installed the gauge at HAL airport station. That is a very short portion – about 70 – 140 sq.km of the city. So, this was the condition till 2012 when we took up the installation in a dense manner. Now, the city is 800 sq.km. and has grown tremendously.

What used to happen earlier was if it rained at Palace Grounds or HAL, the gauges used to record and media reported as rainfall for the entire city. Outer areas were never considered and recorded. Then we analysed and understood – the variation of rainfall within the city which we were able to capture only because of the rain gauges. With this measurement and information we started building the hydrological model with information about the terrain. So that is how the whole project started.

Q. What have been some of the insights or outcome of the project?

To understand the flooding as an issue. We had to study lots of historical rain events, when has it rained, when has it flooded. We collected such information from newspaper reports. We analysed what were the rainfall parameters for different areas of the city. We also contacted the traffic police and the Bhurat Bengaluru Mahanagara Palike (BBMP). They also had some data on the traffic junctions that get flooded. We created the digital elevation model of the city, we understood the slope characteristics, drainage capacity, the rainfall at different intensities.

The findings gave us the low-lying areas. We found out the areas that are flood prone and frequently flood vulnerable areas. There are 174 such areas in Bengaluru. We also found out at what amount of rainfall will an area start to flood – all areas had different thresholds. So, dividing the city into watershed, we found the hydrological map of the city. Connecting this to the capacity of the stormwater drains procured from BBMP ,we are able to predict when would these fill up.

We can now come up with location specific water resource management. From the lakes, we found how much potential water can be stored in them or how much groundwater can be recharged.

Another interesting insight was the city can reduce 47% of the flood. This water can be stored and reused as a sustainable water resource. Our centre, now, gives solutions to the water crisis in the city as well as to flooding.

Q. How has this contributed to making the city sustainable?

So, one is the management scenario of the floods, taking the same results of the study for mitigation or sustainability of the city, we can connect to different sections of the society. By taking our microlevel findings of the floods, how can we infer groundwater recharge, how can we improve our groundwater tables and study the quality of the water. We are going to propose structural and non-structural changes to the administration. Along with the Indian Institute of Science, we are experimenting on porous concrete than impervious structure for construction of the roads which can prevent surplus overflow of water and avoid flooding. These are the sustainable goals we can achieve.

So, we’ve done the watershed analysis for BBMP. Given the present land-use and looking at 2031 projected land-use, how would the city be for given amount of rainfall. We’ve worked on repetitive 20 yrs rainfall, 100 years rain. It looks like everything is developed now so all the rain will contribute to run-off. There isn’t any technically classified stormwater drains in the city – primary, secondary, tertiary – so there are main drains that connect directly from households. We tried to classify the drains and include in the 2031 master-plan team so that they can restrict development in some parts and regulate in others. We’ve given first-level information and they’ve taken it forward.

Q. What steps can an ordinary citizen take and what institutional steps are necessary?

Rain-water harvesting is the basic thing. What I propose is that the town planning and building bylaws has a mandate that buildings have to surely implement rainwater harvesting. The conscious of the people is such that till you pay that crunch they take water for granted as it is free. The quality of water has become a big issue, we used to drink tap water as kids.

Q. What do you think would be the challenges for Bengaluru?

Water quality is an issue taking into consideration the city has a few industrial areas. Such things add to the issue. These, have to be managed at the institutional level. Policies not only on paper but implementable policies – so that they can help the environment and the people.

We want to take up a few things – we want to make mandatory for big layouts to maintain the green areas, or groundwater recharge.

Q. Karnataka is frequently considered as a drought-prone state. What are the challenges?And how has the centre been going about it?

We do a lot of work for drought analysis. We do drought assessment taking into consideration many parameters – dry days, agricultural crops, hydrological parameters, etc. We have a drought declaration manual that every state can follow on steps to be taken. On our 24X7 helpline, called Varnamitra, thousands of farmer call everyday. We let them know what are going to be the weather conditions for the day, for the week, etc. This helps the farmer to manage the crop at the crop sowing stage, irrigating state, fertilizing stage, etc, right until the farmer takes the crops to the market. This helps the farmer to sustain. Now, we are also connecting the farmers to the agricultural scientists for scenarios of prevailing weather conditions what crops they should grow so that the farmers can avoid losses. So, the yield and droughts can be managed.

Q. What gets you excited?

It was my childhood dream to work on water. Water is my religion. I like our work to be taken to the people and help them. Our centre is one-of-its-kind helping many sections of the society.

Lead image of a weather station is meant only as representation. Image courtesy & credit: Shankar CM