Jakkur’s Community Gardens: growing your diet by the lake 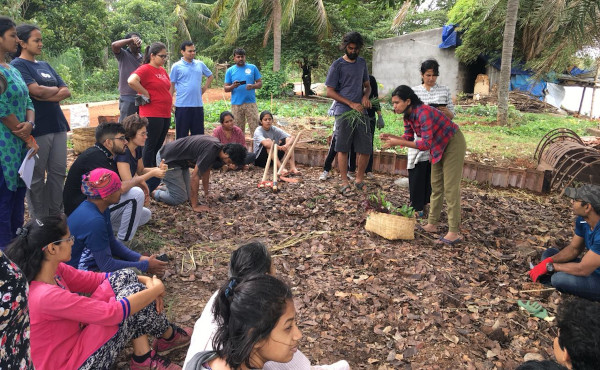 A first-of-its kind initiative at a Bengaluru’s lake is developing a community garden that is nurtured by the people and for the people, while aiming to connect the community to the lake.

As you enter the Sampigehalli gate of the Jakkur lake situated in northern Bengaluru, you walk on a well paved walkway along the rippling waters of the vast lake on one side and an avenue of lush trees by the boundary on the other.

As you walk along the lake opens up and you turn past the gate where the fishermen lay out their fish for the weekly fishmongering. A few hundred metres in the walk you come up to the jetty under a big ficus tree from where they drift their coracles to catch the fish. Just here, on the other side, the row of trees gives way to a collection of plants.

At first, it looks like an adhoc overgrown nursery. But as your eyes get accustomed to the scene, you start noticing it is a well thought-out garden patch. There is a gravelly path that snakes from one end to the other. Above the pathway is a bamboo trellis through which climbers weave in and out as they grow.

This garden extends further along the main walkway but it is arranged differently. There are stone steps instead of the gravel pathway. The plants are taller making them trees, which are more spread out. Climbers and vegetables of the Earth garden

These are the new upcoming gardens – for and of – the community, including fishermen, people from the villages and the apartments, that frequent the Jakkur lake. It is perhaps first of its kind initative being carried out at any lake in Bengaluru. The gardens are cannily named as Earth, Forest and Water and are being developed by Ananas, a landscape design firm using permaculture approaches to build ecologically sound spaces. The firm was approached by Dr. Annapura Kamath of the Jala Poshan Trust, a citizen group for the Jakkur lake, to develop a community garden at the lake.

“Lakes represent a sustainable system, so we wanted people to understand what is sustainability,” says Kamath about the idea behind the concept as the Trust was exploring different ways to set up green spaces that didn’t look similar. “This is specially thought of to maintain the balance between people visiting the lake and  the lake dwellers.”

The going was slow in the beginning as both parties were busy with other projects. The manpower required to prepare the beds for the plants was also hard to come by. But eventually when they started, they hit upon the idea to involve volunteers to help with the initial preparations. “Now after twelve volunteer days the garden has come up with the efforts of people from the community and many far away parts of Bengaluru who took charge to bring the design to life,” says Himanshu Arteev, landscape designer with Ananas.

“We wanted to strike a balance aesthetics and using as much as local, waste material available,” says Kiri Meili, permaculturalist at Ananas. “We also wanted to create a space that’s accessible and walkable for the visitors.” The Ananas team: Himanshu, second from left, with Kiri and Jananee, third and fourth respectively, from left

But this was easier said than done. It all started when the lake was desilted in 2017 and all the silt was dumped at one spot on the lake’s bank. Kamath suggested the team build the gardens at this spot, making use of the silt, as the fishermen could also help with embedding the soil.

“We saw the soil was very clayey but it was a perfect challenge to build the soil and grown plants in such conditions,” says Jananee Mohan of Ananas. “It is a challenge to grow crops in clayey soil as it doesn’t drain the water but clogs it.” So the team choose plants that do well in water seeping conditions as well as do well during the dry times of the summer months. “But we used organic matter along with the soil,” says Mohan. This organic material was the water hyacinth, a weed that proliferates in most lakes across the country, the dried leaves of the Karanja trees dotting the boundary, and the wet waste composted by the neighbouring community. The hyacinth is an excellent source of nitrogen, while the dried leaves contributes carbon and the wet waste provides other nutrients for the plants. “So by harvesting the invasive species and available resources from the lake and building upon it, we’ve found a way to build the soil,” says Mohan. According to her anything green in permaculture is a source of nitrogen, whereas the organic matter is fertilized into manure by insects. “There are no good and bad greens.”

With the ingredients for soil bed in place the team started building the gardens. For the beds they used discarded Mangalore tiles, filled them up with soil, added hyacinth, appended mulch, topped it with compost and sprinkled soil on top. Mulch prevents soil from direct exposure to sunlight and keeps it moist.

The team has embedded an additional element in the soil. To take care of the water requirements of the saplings, they inserted unglazed clay pots, that can hold about a litre of water, in the soil. The idea is the water seeps out slowly keeping the soil moist for the plants to absorb. If you walk around you might notice about twenty pots at a distance of 2 – 3 metres from each other inserted in the ground.

Once all the components of the soil-bed were put together, the team first planted vegetables like brinjal, tomato and chilli. “In the Earth garden the concept was companion planting,” says Mohan. “Some plants are pollinator attractors, some are pest repellants and others grow together.” So they sowed – chilli, tulsi and tomato; carrots and onions; tomato and basil – together. “They also eat well together.” Amongst these you will find bright marigolds that attract bees, herbs like mint, Ajwain and Malabar spinach, beans and Gongura and on the trellis passion fruit creeping through. Volunteers from the community planting a batch of greens

The Earth garden is also distinguished between the walking area and the growing area. Mohan thinks while walking you compact the soil, which in this case is already dense. “You can’t stand at the same spot and plant there,” says Mohan.

For the Forest garden the team made bunds for rainwater to be captured and infiltrate inside. To hold the soil together there is a hedge of lemongrass and the ground is covered with Brahmi. “It is living mulch,” says Mohan. “It covers the soil, keeps it healthy and uses very little water.”

Since it is a patch that resembles a forest, the team has structured the garden in three layers. The trees that form the canopy consists of jackfruit, mango and avocado. Then at the mid-level the team planted chikoo, pomegranate, guava, rose apple, mulberry. And at the shrub level there is hibiscus, lemongrass, rosella, gourds, while the root zone has sweet and regular potato.

Currently, the team is developing the Water garden. They have longlisted a list of trees they would like to plant. “We would like to do native, hardy trees that don’t attract pests,” says Mohan. This garden is named so as it will be right by the lake where visitors can sit on the benches and take in the view. The BSF grant funds are being used to create this space.

According to Arteev the Ananas team has created these gardens for the community that resides around the Jakkur lake. Now it is upto the visitors to the lake to help the gardens grow and sustain themselves. “The gardens are ever becoming, they will evolve into anything the community desires,” he says.

Kamath thinks such a venture benefits both the lake and the community. The lake sees more visitors who forge bonds with the space by participating in the upkeep of the lake. The community can not only practice gardening but also gets closely knit together. She says, “if this becomes a part of their lives, community will have more economical ways of living and more sustainable ways of living and we would get back to a more congenial balance between nature and humans in a sustainable environment where interdependencies are created and lakes can be conserved.”

Editor’s Note: Jakkur Community Gardens is a grantee of the Bengaluru Sustainable Forum from the Urban Water Retreat. To follow the progress of this grantee please refer to the Projects page.