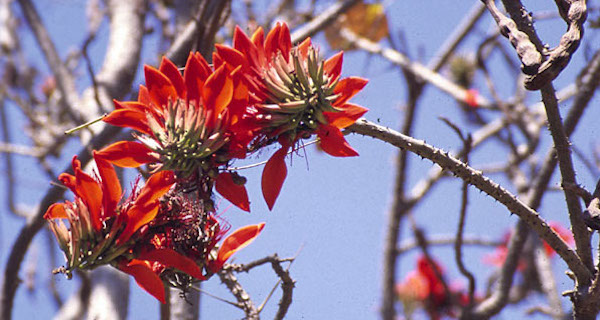 A citizen friendly pocket-sized book in Kannada describes commonly found avenue trees, filling the paucity of such resources in the local language while also creating awareness and affinity with woody beings

T.S. Srinivasa has been leading children and adults on numerous nature walks all over Karnataka, including his city of Bengaluru, for the past thirty years. One of the things the nature enthusiasts are most curious about are the trees. Srinivasa regularly gets inundated with questions about them: ‘Which tree to plant in a small space? Which trees attract birds? Which ones are host plants for butterflies? Which trees will grow big and damage my building?’

“I can always answer, that is not the issue,” says Srinivasa. “But we thought of a book which will answer these questions and also make people explore by themselves.” With this thought in mind, Srinivasa and his collaborators at EcoEdu, an education collective raises awareness about wildlife and ecosystem conservation through participatory engagement, decided to bring out a book in Kannada on commonly found avenue trees of Karnataka. The book is inspired by an earlier book in English on avenue trees by Karthikeyan S, naturalist at Jungle lodges & resorts, and is contributing photographs to this one. But this Kannada book is a fresh documentation of avenue trees.

“The idea to bring out the book in Kannada is that we can reach more people,” says Ulhas Anand, of EcoEdu and a collaborator on the project. “Once a subject is popular, there is more awareness and people develop a sense of empathy with what is around them.” Anand thinks if people know what’s around them there are more chances that they will protect it. “There are also more chances that they will plant more of what they know.” Memebers of EcoEdu on an avenue tree walk with school children

The book is aimed at a cross-section of the society. It would be of interest to a nature lover as she can find out what avenue trees are found in her city and across Karnataka. The book would be of use to an urban planner as she can choose from a long list of 50 trees to plant along the avenue roads. The authors have made the book appealing to tree lovers as they can find out what trees are suitable for a garden. The book also has different colour schemes. “Incase you want trees to flower throughout the year, you can choose from some trees,” says Srinivasa. “If you want a collage of colours, you can choose different species.”

Over the past three decades, Srinivasa and Anand have spoken to a large number of school children across the state about wildlife, igniting an interest in them. “We’ve found that kids who had attended the programs have taken further interest in the subject and have gone on to do their Masters or earn doctoral degrees,” says Srinivasa. So the book is particularly targeted at school children. “A lot of them get school projects for which they can get information about the trees in their neighbourhood,” he adds.

The team would be printing 1000 copies to be distributed amongst schools across Karnataka. They would also be conducting nature walks with schools in the periphery of Bengaluru, sharing with them how to use the book. Citizens on a tree walk, getting to know them better

The team is gearing towards the completion of the project. “Translation is in progress and the layout is being finalised,” says Anand. They target to finalise the layout by the end of August and have already collected the photographs to go along with the text. The book will describe the trees – either by an icon or by notes – if they are native by their mention in history or culture over a long time. They plan to bring out the book by the end of October, whereafter they plan to take them to the schools. Citizens on a tree walk in a park

Going out for over thirty years, the team has maintained records of what tree is found in which city. This, added to the vast network of co-conspirators who have done the same, they hit a good representation of common trees found in a place. “It is a combination of native and exotic trees – some of them were introduced by the British, some planted by earlier rulers, so somehow these have become the most common species in Karnataka,” says Srinivasa. They initially drew a longlist of 150 species of trees but eventually settled on 50 that are easily found so that people don’t have to go searching for them. “If you go for a walk in Cubbon Park or Lalbaug, you may find 35 of these,” quips Srinivasa.

But Srinivasa thinks common trees came to be common during the British times as most of the trees were first planted in Lalbaug and then later introduced to different parts of Karnataka. “That’s why you see that most of the species are the same everywhere, not much effort went in introducing species that are native to one region,” adds Srinivasa.

But geography defines species. The team found trees like the Flame of the Forest, Indian laburnum, Pongam, the Indian coral tree widely spread in dry regions of the state, along with the Gulmohar which has adapted to different climates. Whereas, in the wetter regions they documented trees like Champaca, varieties of Bauhinias and Bakula pushpa. In the Mysuru – Bengaluru area the native trees have been replaced by exotic ones. So gone are the Mahua, tamarind and fig species.

The team thinks such a book is relevant for not only Bengaluru but Karnataka too. “We are not preaching a traditional understanding of avenue trees,” says Srinivasa. “Avenue trees support a lot of wildlife.” He elaborates that the nests of the crows are later used by other crows. Tree holes that barbets fly out of are later used by mynas. Apart from these, avenue trees are habitats for insects, different butterflies and spiders too. “ You focus on many aspects of nature not just one thing,” concludes Srinivasa.

And that is the larger point, as cities expand and forests grow further away, people miss out on experiencing a natural habitat. “Trees become essential in urbanised locales with concrete, glass, traffic and smoke,” says Anand. “Trees are the lowest common denominator for a hot midday sun.”

Editor’s Note: Field Guides in Kannada for Common Avenue Trees is a grantee of the Bengaluru Sustainable Forum from the Urban Biodiversity Retreat. To follow the progress of this grantee please refer to the Projects page.