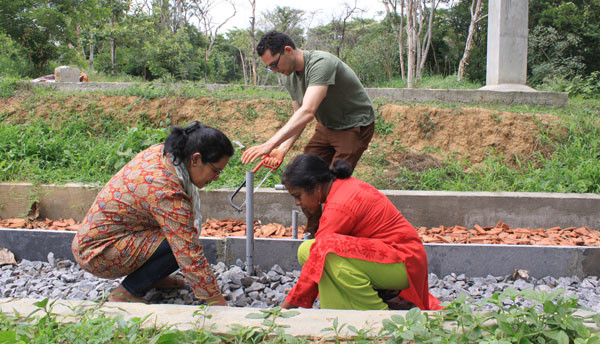 A novel decentralised in-stream system, conceptualised with inexpensive local materials that are easy to maintain, and releases decontaminated water in Bengaluru’s lakes.

But in recent years Bengaluru’s lakes have become infamous for catching fire, frothing and becoming dump sites. Earlier, water from the lakes was used for drinking, agriculture, washing cattle and other purposes. Now, many lakes are heavily polluted due to sewage, industrial contaminants and untreated wastewater released into the city’s water bodies, rendering them unusable.

A new approach to decontaminating wastewater could be just the solution to cure Bengaluru’s lakes of their pollutants.

“The whole idea is to come up with simple modifications to the storm water drains, where the wastewater is diverted currently, by which you can clean the water as it flows into the drain itself,” says Shubha Ramachandran, water sustainability consultant at BIOME Environmental Solutions Pvt. Ltd and one of the team members undertaking this project. The team has named this approach as STRAINS, acronym for Strategic In-streams systems to decontaminate wastewater.

Wherever sewage treatment plants (STPs) exist at a lake, polluted water is diverted through the facility to improve the water quality inorder to make it usable, before being released in the lake. “Here the idea is to acknowledge the streamflows, and in the streams mimic nature to hasten the process of water treatment in the duration of its flow through the drain,” says Ramachandran. “As the water passes through the drain, it’s quality improves.”

The idea was thought out by researchers at the Ashoka Trust for Research in Ecology and the Environment (ATREE). Since the team didn’t have any precedent anywhere in the city to follow, they first carried out experiments in their lab.

Priyanka Jamwal, a Fellow at ATREE, tested three cheap, easily available materials – terracotta, gravel and cinder – by exposing them to synthetic sewage. “We exposed them to calculate flow rates, hydraulic retention times, etc to test which of the materials gives best efficiency with like things like fecal removal,” says Jamwal, who is also part of the project. “We found terracotta gives the best efficiency.”

With results in hand, the team wanted to test the experiment, with actual sewage, at a larger scale. They zeroed in on Saul kere (lake) in Sarjapur. But as they were constructing their model, they found out that it wasn’t easy to procure terracotta at the quantities the project required. But gravel was the second most efficient material easily available. “So then we decided to test both terracotta and gravel side-by-side,” says Jamwal.

This is where the project is at, currently. As sewage flows through stormwater drains, it passes through the structures the team has constructed before reaching the lake. Every month the team collects samples of water at the points where the water enters and exits the terracotta and gravel channels, along with two other points in the channels. This because the team have noticed as the water retains in the channels, it filters.

The initial results have been encouraging. “After the first round of sampling, terracotta is giving us much better efficiency as compared to gravel,” reveals Jamwal. However, she cautions, “this is at the initial stages as the idea is to standardise the system.”

The teams puts emphasis on frugal, flexible and inclusive in-stream approach to managing wastewater in a decentralised manner. “We think about the incorporation of inexpensive local materials, inexpensive local processes that don’t require huge inputs of technology or skills or maintainance,” says Daniel Phillips, a landscape architect pursuing doctoral studies at the University of Michigan, USA.

Easy maintenance of the system was also a consideration for Ramachandran. “Because in the long run you can do many things to filter water but if it is not easily maintainable with regards to filtration of the water then it becomes a challenge,” she says. Along with this, Ramachandran’s design firm contributed towards locating the placement of filters in the channels.

The team is quietly optimistic about the project’s success. If this pilot succeeds, the team is keen to replicate it at other places at higher capacities of decontaminating wastewater. They would also like the municipal corporation of Bengaluru to adopt this system for all the lakes in the city. But as the data continues to be gathered month after month, Phillips plugs the findings into scaled up watershed models. “It gives us a demonstration of how the decontamination would be without having to deploy physical structures at the catchment but through ecological modeling,” he says.

“In the future we are also exploring the possibility of planting certain kinds of trees that can  improve the efficiency further.” This is green infrastructure system, according to Phillips. He, however, cautions that just because there would be trees planted wouldn’t make the channels free of risks – of carrying diseases, for example. “We must recognise that these are degraded ecosystems as contaminated water flows through them.” he says.

Bengaluru generates over 1,100 million litres of wastewater per day (mld), out of which currently only 50% can be treated. According to the 2031 Master Plan for the city, this would be reduced to 371 ml of wastewater per day that flows in the open drains. This novel system could not only bridge this deficit but also decontaminate the waste.

Editor’s Note: STRAINS is a grantee of the Bengaluru Sustainable Forum from the Urban Waters Retreat. To keep tabs on the progress that STRAINS makes, please refer to the Projects page.