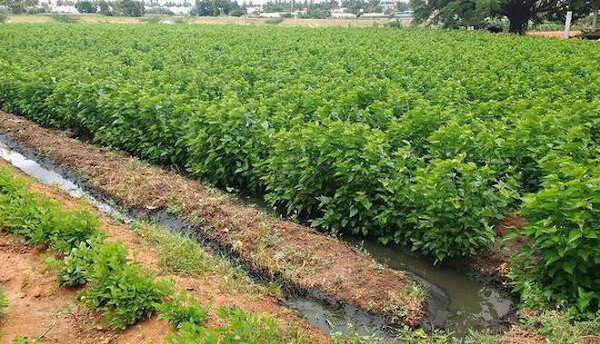 The diverse team of scientists, sociologists, designers, journalists and climate change students had landed up in farmer Muniraju’s fields one early morning in the small town of Vijayapura close to Bengaluru one early morning. Walking through the green mulberry fields, they were wanting to find out what was special to this farm.

The town had put in place a sewage network some years ago but could not find the land to set up a sewage treatment plant. Raw wastewater flowed in the drain next to Muniraju’s fields. In the meantime, the well in his field had dried and the borewell he dug did not yield water. Muniraju had to work in the fields of others as a labourer for six years, till he saw the wastewater flow and thought of using it on his farm.

After years of experimentation, he has found methods of irrigation that does not allow the wastewater to pool, come in contact with workers on the field, does not spoil the soil and yet gives a productive crop. The luxurious foliage of the mulberry was a testament to the fertilizer embedded in the wastewater and the astuteness of Muniraju’s stewardship of the land.

Fellow farmers have learnt from his experiment and now have a system of rotation of the wastewater, sharing the resource between them and in a time of drought, transforming the landscape or at least a portion of it to be green.

Yet, for a lot of people, ‘cognitive dissonance’ kicks in when they see the farm. What about the health risk, they ask. Mulberry is non-edible, has no fruits and is certified by the silk worms that eat it as edible. What about groundwater pollution, is the next question. Groundwater tables are at 1000 ft. and there is no chance of pollution. What about long-term soil health? I have been farming for over 15 years and the soil is as productive, says Muniraju. The questions go on.

We who are so overwhelmed with standards and imaginations of a solution which involves a Sewage Treatment Plant, cannot imagine that untreated wastewater can be used by a farmer without causing health or environmental risks.

There is so much to learn from him which can feed into the wastewater management loop, yet we think solutions will come from engineers designing systems.

In an era of climate change, sea-water and urban wastewater, to an extent, can be called climate-proof water. Vast areas of our cities and towns will be irrigated by such waters.

By declaring them as Special Agriculture Zones, by eliminating industrial effluents and heavy metals from the wastewater, by forging compacts with farmers on the reuse of these wastewaters for non-edible crops, it is possible to imagine a future which at its extreme can mean that small towns do not need STPs at all and that the farmers’ fields become the STPs.

While India fast runs out of groundwater, while our surface waters run dry, when agriculture is in crisis and farmers struggle to make a living, the reuse of wastewaters promises one small yet significant solution to water woes and to combat climate change.

Muniraju and the knowledge he possesses as a farmer and as a wastewater user should become a teacher for waste management. There are hundreds of farmers like him from whom we can learn and co-create solutions to eliminate risks that emerge. Water wisdom would be in building and deepening such conversations and bringing science to play.